Mostly we have dogs as companions, however it’s no secret that they were originally brought to help humans with jobs. Different breeds share different purposes. It’s so interesting to see dogs do their job as intended. They have been helping us, humans, with our tasks for thousands of years!

I have such admiration for working dogs. I don’t think I can explain with my own words what I feel whenever I see a dog doing its job. They are so concentrated and fulfilled while doing so, it’s wonderfully shocking. Some dogs have even gotten new jobs over time: For example, Golden and Labrador Retrievers are originally bred to retrieve birds, but today they also excel as Service Dogs, Therapy Dogs, Detection Dogs, and more. It should be noted that nowadays not all dogs are working dogs even if they are a working breed.

So, what kind of working dogs do we have out there? On my way of seeing it, they can be divided into two. The working dogs that do their original work and the types that have been adapted to new jobs. Today specifically we want to point out the “original work” kind.

Isn’t it fascinating? how they actually have instincts that allow them to do a task successfully? Although this kind of working dog requires training, most of the things they are bred to do, they mostly do naturally! Yes, with training and guidance they will do it even better, but it comes from their own genes.

Tomy as we have mentioned is an Anatolian Shepherd, I see so much of his genes in how he acts. Yes, he is a house dog, but when we researched his breed I found a lot of similarities of when an Anatolian is working, and how he acts. I am not saying he is a working dog, because he is NOT, however, I am saying that I see his nature come out once in a while. Deep down I ask myself if he would know what to do if we had sheep or goats for him to protect. It will probably always stay in doubt!

These are important things you should know when getting a dog as well. Understanding where they come from and what they are programmed to do can help us understand their needs and traits. 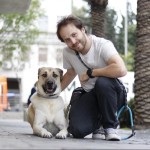